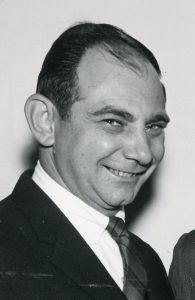 A brief obituary appeared in the Louisville Courier-Journal as follows: http://www.legacy.com/obituaries/louisville/obituary.aspx?page=lifestory&pid=149130642#fbLoggedOut

He was a Navy veteran of World War II, and served in the Korean conflict. During World War II, he served aboard the U.S.S. Gilbert Islands CVE-107 and was the author of the ship's history. Born in New York City, he was a graduate of DeWitt Clinton High School and the University of Alabama. A pioneer of the information industry, he was the author of several books and numerous technical papers. He served as editor of the Journal of the American Society for Information Science and Information Services and Use. In 1992, he retired as director of marketing and distribution for Biological Abstracts Inc. in Philadelphia. He was an Honorary Fellow of the National Federation for Abstracting and Information Services and was honored with the Watson Davis Award from the American Society for Information Science. - See more at: http://www.legacy.com/obituaries/louisville/obituary.aspx?page=lifestory&pid=149130642#fbLoggedOut