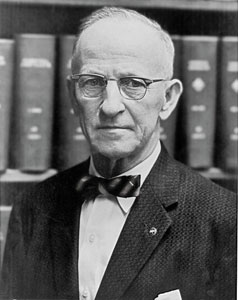 OTHER INFORMATION:
Crane was Chemical Abstracts Editor from 1914-1958, the leading abstract journal in the field of science, largely due to its "effective indexing of chemistry." Crane published numerous articles on abstracting, indexing and documentation activities. He changed the indexing system of Chemical Abstracts from word indexing to classified subject entry. He developed a unified system of chemical nomenclature. Crane was the first director of CAS 1956-58. He wrote A Guide to Literature of Chemistry (1927) with Patterson.

Baker said, "He forged the 'key to the world's chemical literature'...organized, along with the help of Dr. Patterson, and weld[ed] chemical information into a discipline...was devoted to bettering [scientists'] science by bettering their access to it." Crane started the List of Periodicals Abstracted by Chemical Abstracts in 1908 to help the user identify the complete titles of materials cited by abbreviations and to provide the user with a list of publishers and addresses for the abstracted material.

INCLUDES:
Papers and correspondence are housed in an off-site facility of CAS. None of the papers have been processed or indexed but this is considered a temporary status since in the future CAS is looking to organize the archives. Anyone interested in examining Crane's papers should notify the CAS librarian who can retrieve the papers within a day or two from the off-site storage.

FINDING AID:
None available at this time.