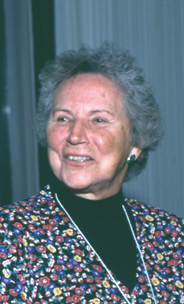 OTHER INFORMATION:
Before she became professor at Syracuse, she was Associate Director of the Documentation Research Project at the American Institute of Physics. While ASIS President, the organization began a continuing education program and prepared an international information science directory. Consultant to many organizations. As an UNESCO (UNISIST program) consultant, she prepared guidelines for organizing training courses, workshops, and seminars in technical information and documentation.

She edited the Handbook on Information Systems and Services for Developing Countries. She was appointed to the Committee on International Scientific and Technical Information Programs (CISTIP) of the National Academy of Sciences--National Research Council. Cochran's interests include computer-based reference services, indexing and abstracting, and education for library and information science. For a more complete biography see Kathryn LaBarre, "Pauline Atherton Cochrane: Weaving Value from the Past" in Libraries and the Cultural Record, Vol. 45, No. 2, 2010.

INCLUDES:
Personal/professional papers have been deposited and guide is available at http://archives.syr.edu/collections/faculty/cochrane_box.html ; also includes an oral history interview of her by Kathryn LaBarre, 2001.

A Report to the Institute of Physics

Pauline Atherton Cochrane
The 1960s and 1970s were a special time for Science Information Systems. The leadership provided at the National Science Foundation (with Burton Adkinson and Helen Brownson to mention only a few) provided. more than financial support. They provided the opportunities for researchers and practitioners to meet and discuss how they could learn from each other, work together, and advance the state of the art. The terms Mission-oriented and Discipline-Oriented Information Systems meant something then and the idea of cooperation, collaboration, and networking were seen as necessary and desirable if we were to develop improved information systems for scientists in this country and elsewhere.
Because the two major discipline-oriented abstracting and indexing services for the English language community had divided the pie in the early 1900s, it was necessary for me to work very closely with the Institute of Physics in London as well as the American Chemical Society in Columbus, Ohio. There was no "Physics Abstracts" published in the United States. What I heard from the physics community could be summarized like this: "Chemical Abstracts covers that part of physics which a chemist can understand and Nuclear Science Abstracts covers that 'small' field called nuclear physics. For the rest of physics we have to go to the British publication and it needs to cover physics better than it does."

My task then, from 1961-1966, while Assistant Director of the Documentation Research Project at the American Institute of Physics, was to insure improvements in the coverage of physics research by the world's major abstracting and indexing services and if possible, to draft the requirements and begin the development of a new, computer-based Reference Retrieval System which physicists could trust and would use.

The memorable moment I want to share happened when I submitted a confidential report to the Institute of Physics on the coverage of Physics Abstracts for 1961. (The public report appears as the publication AIP/DRP PA1 (1964), The Journal Literature of Physics; A Comprehensive Study Based on Physics Abstracts, by Stella Keenan and Pauline Atherton.)

I sent my confidential report over to London a month before I traveled there in August 1962 to work out ways we could use the report's findings to improve Physics Abstracts. I could feel the veiled antagonism and coolness of the assembled staff, including Bernard Crowther, the editor of Physics Abstracts and even the director of the Institute of Physics. Each staff member had a large report in hand, but it was not my report! It was their response to "The Atherton Report" attempting to justify renouncing the report's findings on book coverage, on time lag and journal coverage details (e.g., 4511 of the 1961 issues covered pre-1961 publications; 8% pre-1960!). I was all alone in this room of experienced abstractors and indexers and respected physicists. I had no credentials to offer that would upgrade my report--after all I was just a librarian with no science background who was enticed into this world of science information systems. But one thing I did have that they didn't -- data, which couldn't be refuted by their data. They really did not have, at that time, an easy way to determine time lag, coverage of journals and books, which did not come to their offices direct from publishers. They occasionally went over to the British Museum Library if they noticed that their copy of  an important new journal had not arrived in the mail. So after the initial skirmish, we agreed to try and improve their acquisition procedures, to investigate scanning the input at the Boston Spa Science Library to improve coverage of foreign language physics journals, and to improve indexing procedures with automated techniques. Remember that this was before INSPEC. Maybe in some small way I helped get INSPEC into high gear by encouraging the Brits to do what we in the U. S. would not be doing for any time soon. Our approach at the time was not to build a new system for physicists unless the existing ones couldn't be improved.

I also worked with Nuclear Science Abstracts and Chemical Abstracts in the U.S. We all felt part of a team that had government support, professional society interest and obligation to do more for their members, and the possibility of implementing any research and development efforts that appeared likely to improve the current situation. My six years at AIP, working with journal editors, information center personnel, librarians, and other researchers was a most exciting time, in this country as well as in Europe, but that initial meeting at Physics Abstract is one I will always remember as breath-taking.