Architecture and libraries: flows and forms in spaces dedicated to culture

This one day symposium took place at the 29th January, 2015 and was held at the Lyon Central Library. It was co-organized by the Central Public Library of Lyon (BML) and École Nationale Supérieure des Sciences de l’Information et des Bibliothèques (enssib).

Gilles Eboli, director of BML, and Thierry Ermakoff from enssib have opened the one day symposium. In the morning session all talks were in French. Thus, for me it was not possible to understand much. But here is the program in French.

In the afternoon session three international speakers were invited.I was one of them and talked about a research project in which we analyzed the core physical and digital services of Public Libraries in Informational World Cities. In this research project we studied 31 Public Libraries around the globe. One of our main findings was that researchers and innovative librarians see the future of library services not in physical book collections in their buildings, but in information literacy, use of technology and available community space for more activity and interaction in their spaces.

For further information about our findings you may download the following paper: “Public libraries in the knowledge society: Core services of libraries in informational world cities.” by Mainka, A., Hartmann, S., Orszullok, L., Peters, I., Stallmann, A., & Stock, W.G. or watch my slides on slideshare.

The benefit of being invited as a speaker to a symposium is, besides presenting own research, to be able to get in contact with other speakers, the organizers, and also to learn what they are doing. I was really excited about the other presentations in the afternoon session and also about the Central Public Library of Lyon.

The available services in this library meet the needs of citizens in the 21st century. There are working spaces, a café inside, iPads and computers for public use and many more. Sheza Moledina – she invited me to come to Lyon – told me that Lyon Public Library organized the IFLA World Library and Information Congress in the last year and the library was renovated to be representative. I think, they have made a really good job!

Here are some impressions from inside: www.bm-lyon.fr 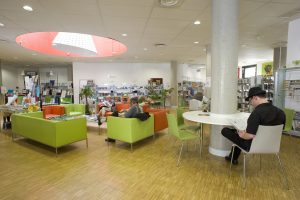 Another presentation was held by Marie Østergård. She is Project Leader and Partnership Developer of the Urban Mediaspace Aarhus (Denmark). She presented the new space for a Public Library in Aarhus which is called Dokk1. Compared to my analyzed cities, this is a really new way of interpreting a library`s role. The key element of the new building is space for the community. The opening of Dokk1 will be in summer 2015, and in September the next Library Festival will be held in the new building. (Read more about Dokk1 and the idea behind this new building on MAB14 or Urban Media Spac Aarhus) 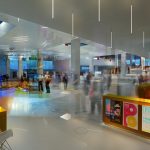 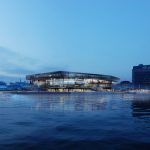 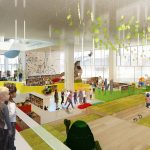 The second presentation was held by Pirjo Lipasti. She is Chief Planner of the Central Library Project in Helsinki. Similar to Marie Østergård, she presented the plans of the new public library building, which includes much space for activity and engagement. But for her it is still important, that the people, who come into this building, know that they are in a library. The plans and money for the library are gathered. The construction will start soon and in the near future Helsinki will have a new landmark in the city. 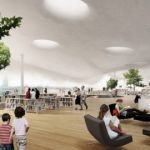 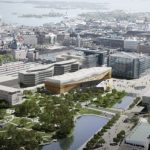 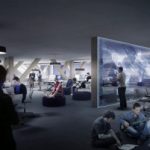 When I had come back from my trip to Lyon I reported my colleagues about these exiting projects in Aarhus and Helsinki. They are not as enthusiastic as I and asked me why these buildings are still called libraries? Are these really the needs of the citizens? And how do the project leaders identify these needs? My colleagues are right, when they ask “why these buildings are still called libraries”, as most people have the same picture in mind when they think about a library. They think of collections in shelves, some computers to browse the library catalogues and reading places. But the libraries’ role changed because the citizens’ needs changed. Public Libraries are not just books. They are places of knowledge transfer. Knowledge can of course be transferred through books, but today, in the information age, we have more possibilities, since we are globally connected through ICT. Next to technology movements information behavior  also changed. Citizens act as a community and help each other to learn and to understand. Thus communication is also very important in libraries. A method to identify what may work in a library is simply to test it. This is what Marie Østergård for example did. In Aarhus they tested different installations in an existing library and investigated whether the library user liked it. They made it step by step for different activities and now combine their best practices in the new library Dokk1.