Introduction: This document summarizes previously published articles about the evolution of ASIS&T - from its start as the American Documentation Institute (ADI) through today. Click on the links to read the articles in their entirety. 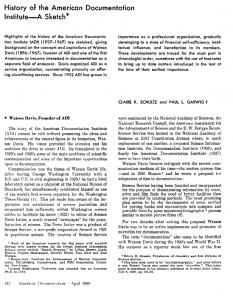 Claire Schultz (president) and Paul Garwig co-authored a history of the first 30 years (1937 - 67) of ADI.  They begin, “The story of the American Documentation Institute (ADI) cannot be told without presenting the ideas and achievements of the central figure in its formation, Watson Davis” (p. 152). Davis’s goal was to use miniaturization, indexing, and cooperation to provide access to every scientific and scholarly publication, which he described in his 1962 address to ADI as “one big library” and “one big journal”: a fully indexed, microfilmed record of the scientific record. ADI was a member of the International Federation for Documentation (FID), and had established a journal: American Documentation. Schultz and Garwig lamented its focus on techniques and tutorials on “indexing, classifying or coding schemes” rather than research; they described copyright restrictions and ADI’s past financial problems. By the mid-1960’s its trajectory was brighter. Changes in the field had prompted ADI to adopt a new name, ASIS, in 1968. It was closely tied to the Special Libraries Association and the American Chemical Society, was financially solvent, and had developed all of the hallmarks of a mature professional association.

Schultz followed up seven years after she and Garwig authored its first history. The March 1976 issue of the Bulletin, entitled “Information Science in America” was published on the eve of the nation’s bicentennial. The theme was revolution, focusing on America’s contributions to information science and librarianship. Schultz discusses ADI’s original goals: “to use a newly developed documentation medium – microfilm – to accomplish four purposes” (p. 49) that Davis envisioned as a means to transform scholarship. Enacting this vision was complicated and fraught. Under Davis’s leadership ADI was composed entirely of hand-picked members. In 1952, Librarian of Congress Luther Evans opened membership. The 1960’s brought a post-war excitement about scientific and technical advancements. ASIS grew, with members representing “librarians, authors, publishers, mathematicians, equipment technologists, communication theorists, linguists, and users of messages” (p. 50) and by establishing chapters and Special Interest Groups, a formal administrative structure, and expanded publications. Schultz predicted that the 1970’s would see improved finances for the Association as the world would recognize the value of information science as a profession that would guide decisions about technology and law.

The June/July 1988 Bulletin of the American Society for Information Science was devoted to the Society’s 50th anniversary. It includes a synopsis and a list of seminal readings from each decade, a list of ASIS SIGs and a photo gallery of 24 Pioneers of Information Science. Lois Lunin’s bittersweet introduction to the issue celebrates the Association’s progress while lamenting its shrinking membership. The issue ends with Eugene Garfield’s proclamation that “We live in a new age – some would say a golden age – of science and technology. Societies the world over understand the increasing importance of science and technology to economic and social well-being and improvement” (p. 38). He credits scientists, technologists, and politicians who support technological progress, emphasizing the economic impact of the knowledge industry and the ethical imperative of access to information for developing countries.

ASIS’s membership was in decline, and Saracevic wrote that ASIS must leverage its identity as a human-centered organization. Information science was now a part of society, but ASIS’s relevance was in question. The ASIS 2000 project offered new mission and vision statements that asserted ASIS should leverage its strategic position as a bridge between disciplines and borders: an association where scientists, professionals, educators, business people can find a home for conversations and high-quality, useful learning. 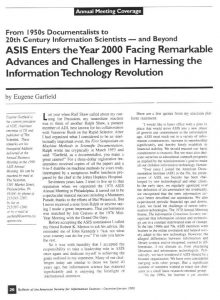 Two 1999 special 50th volume issues of the Bulletin were “dedicated to reflecting on the past, debating the current issues in the field, predicting the future – and celebrating it all”. Issue 1 was devoted to the Journal, its Society, and the Future of Print, and Issue 2, to Paradigms, Models, and Methods of Information Science. Selected articles follow:

As the newly elected president of ASIS, Garfield met with the Executive Director and reported feeling as if he “was reliving a bad dream. Our 1960s financial crisis was accompanied by an identity crisis reflecting the growing divergence of information and technology then taking place” (p. 26). ASIS’s financial woes, caused in part by the “disastrous effects of the 1976 Bicentennial Conference, as well as a series of monographic publication failures” (p. 28) would make it difficult to meet his Presidential goals. He describes the 1970’s decision to focus on research rather than creating a wider appeal industry and librarians, who might have offered financial stability. By 1999, membership had dropped from a high in the early 1980’s of almost 4000 to about 2400. Garfield’s strategies for increasing membership included offering dual memberships with sister societies, expanding student membership. and nurturing ties with SLA and ALA.

Buckland, 1998 President of ASIS, wrote about two traditions in the field and in education for the information professions: the “document” tradition of archives, librarianship, etc., and the “computational” tradition, focused on information retrieval. Convergence between the traditions can be discerned even in the early 1900’s in the European roots of Documentation; the concept of hypertext also binds them in “technological modernism: standards, codes and rules, systematic organization, purposive information systems…” (p. 971) that enables digitization and digital libraries. He asserts that the field must embrace a broad array of theories and practices while seizing on current and dynamic hot topics as they arise. Buckland provides a circumspect though no less dismal view of declining membership while noting that ASIS is not unique in its decline. 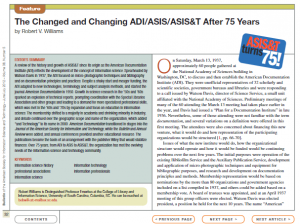 Williams’ 2012 retrospective traces ADI’s beginnings as an institute for organizational members, including library associations, information agencies of the federal government and commercial institutions. It opened to individuals in the 1940’s, and in 1952 the organization took a democratic turn, adopting new bylaws and a new constitution. He describes disagreements among leaders and members about the organization’s direction, stemming from vague terms such as documentation and information science. Membership declined sharply between the mid-1970’s and 2000, as ASIS had become merely a venue for academics to report the results of research rather than a valuable source for innovation. Publications had been both a source of income stability and financial strain due to loans and royalty negotiations with Wiley. Recent changes included adding the T to ASIS in 2000, and formally embracing an international scope, increasing global membership and influence.

These short historical articles of the ADI, ASIS, and ASIS&T trace its evolution from a small, national organization made up of government and corporate members dedicated to sharing scholarly information to an international organization made up of researchers, industry leaders, and government workers. Stay tuned for Alex Poole’s upcoming, thorough historical account of the field and association!