Wikidata: An Introduction to the Database of the World’s Knowledge

Imagine Wikipedia’s information in a structured form: that’s Wikidata. Wikidata is a free, open, collaborative, and multilingual knowledge base that can be read by both humans and machines. It’s a central storage for structured data that can be used by Wikipedia and its sister projects, as well as the general public. Wikidata proves to be a powerful and useful tool for libraries, museums, mapping services, developers, and everyday people.

Kevin Payravi will present ‘Wikidata: An Introduction to the Database of the World’s Knowledge’ in person and via webinar.  He will cover the basics of Wikidata, the problems it solves, and the powerful tasks it can accomplish for people and organizations now, as well as in the future. He will explain how people contribute to Wikidata, and how Wikidata can be utilized by anyone for their own projects, queries, and more.

Kevin Payravi is an undergraduate student studying computer science and engineering at The Ohio State University. He has been a volunteer editor of Wikipedia and its sister projects for over 8 years. At Ohio State, Kevin founded Wikipedia Connection, a student organization that connects students and faculty to Wikipedia through workshops, edit-a-thons, and more.

Online as a live webinar

Register: here by Monday, January 16. Free to all in-person attendees, and to ASIS&T members joining via webinar. Non-ASIS&T members attending the webinar pay $5 below after registering. 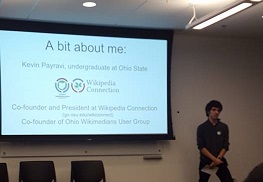 We at CO-ASIS&T would like to say a big and heartfelt “THANK YOU” to Kevin Payravi for his presentation on Wikidata last week. Not only was this undergraduate up-and-comer’s talk interesting, informative, and polished, but he skipped out on his organization’s celebration for Wikipedia’s 15th Anniversary so he could get the word out about Wikidata. Visit the Wikipedia Connection’s website here – https://en.wikipedia.org/wiki/Wikipedia:Wikipedia_Connection – to learn more about the organization he helps run, including a list of upcoming events.  Thanks again for your time and knowledge.

Our next event is the evening of Thursday, February 16, where we will get a tour of the newly renovated Local History and Genealogy Department at the Main Branch of the Columbus Metropolitan Library. Mark it on your calendars and stay tuned for details in the coming weeks. See you soon!