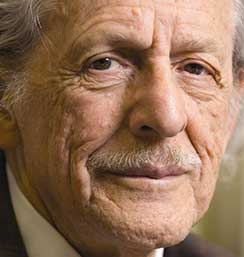 Eugene Garfield was born on September 1925  in New York. He graduated from Columbia University in his native town in 1949. He received the title of MSc  from the same University. In 1954 he defended a PhD  at the University of Pennsylvania.

Afterwards he was awarded  several honorary doctorates  (the University Vrije in Brussels, in 1988, at the State University of New York at Albany in 1990, from the Thomas Jefferson University in 1991, the University of Rome Tor Vergata in1994, and the Karolinska University in Prague in 1995.) Gene Garfield started his career as a research scientist in the field of chemistry in 1949, after which he worked as a chemist at Columbia University, in 1950 and 1951, and became a member of a project team for machine indexing. From 1954 to1960 he was CEO of Eugene Garfield Associates in Philadelphia. In 1960 he founded the Institute for Scientific Information – ISI and was its president from 1960 to 1993, and since 1994 its honorary president. In 1986 he became owner of  the journal The Scientist. He was  associate professor of information science at the University of Pennsylvania in 1974, Member of Rockefeller University since 1978 and a member of many international scientific institutes. His scientific work is enormous and among others includes the books Citation Indexing Theory and Its Application in Science, Technology and Humanities (in a series of Information Science) and Transliterated Dictionary of the Russian Language. He wrote articles and editorials in Current Comments and Current Contents,  since 1956 in Commentary and The Scientist.

He is worldwide known for his innovative, and widely used information service Current Contents (since 1956). Well known and much quoted are his Essays of an Information Scientist, published in 15 volumes, from 1962 to 1993. He was member of many professional and scientific associations in the United States and abroad and won numerous high awards.

It is difficult, almost impossible to list all Garfield achievements. He will especially be remembered in Croatia, with his overwhelming contribution to the development of automatic indexing and scientific information. He visited Croatia in 2004, and was guest of honor at  International Conference LIDA (Libraries in the digital age). Although with health problems he kindly responded to our request and spent with participants LIDA three unforgettable days in Dubrovnik and the island of Mljet. He gave a  specifically prepared talk and, as he admitted, he was very nervous because it was the first time his youngest son, Alexander Merton Garfield, listened to him teach. Alex, along with his father, will be remembered by Osijek students as a simple, friendly and very approachable persons. I dare to believe that Gene Garfield not only remained in the memories of many students who have then seen and heard him, but that he encouraged their further study and activities in Information Science.

Personally, I feel that we have lost a great scientist and a friend who has always found time to talk to colleagues from our region and generously helped whenever we needed it.

To him be glory and thanks.