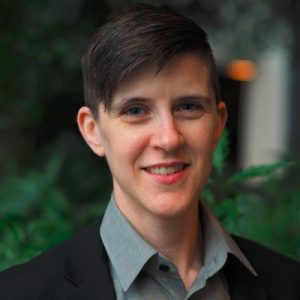 The Association for Information Science & Technology (ASIS&T) is delighted to announce that Dr. Devon Greyson is the 2018 recipient of the ASIS&T Cretsos Leadership Award. The award’s purpose is to recognize a new ASIS&T member who has demonstrated outstanding leadership qualities in professional ASIS&T activities.

The award is named in honor of James M. Cretsos, long-time member and leader in ASIS&T. Cretsos served as President of ASIS&T in 1997 and was also an active leader and contributor to the Southern Ohio Chapter, SIG-CON, SIG-MED, and the Awards & Honors Committee. He is perhaps best remembered for the role he played in mentoring emerging leaders in the field of information science.

Dr. Greyson was selected as the winner from among a pool of outstanding candidates who were judged based on these criteria: participation in ASIS&T annual meeting as organizer, moderator, speaker, discussant, etc.; participation in programs and activities of SIGs, chapters and/or student chapters; services on ASIS&T committees; and recruitment of new ASIS&T members and/or retention of existing members.

The awards jury provided the following citation: “The Committee and Jury members noted that Dr. Greyson, an ASIS&T member for 5 years, has served various areas of the organization, including the Education and Professional Advancement Committee, SIG Information Seeking Behavior and Use, and the New Leaders Program. In addition, Dr. Greyson has contributed to ASIS&T as a scholar at the Annual Meeting and in ASIS&T publications and has demonstrated a strong commitment to the Association, its members, and to information science and technology. This presence across the Association is exemplary for a new member and was highly praised by the group of Award selectors. We look forward to seeing Dr. Greyson’s continued involvement in the Association in the years to come!”

In her letter of nomination, Dr. Heather O’Brien wrote, “In addition to [showing leadership in] formal activities, Devon has encouraged other early career information researchers and information professionals to attend the ASIS&T Annual Meeting and consider joining the Association, has formally recruited two New Leaders and judged the Student Design Competition in 2017.  As well, Devon participated in discussions regarding social justice issues with ASIS&T meeting attendees and ASIS&T Board members, precipitated by the political backdrop of the Annual Meeting held in St. Louise in 2015.”

Dr. John Budd wrote, “I have worked as a mentor to other young members of ASIS&T and can say without hesitation and with the utmost confidence that Dr. Greyson is a genuine leader in the organization, setting an example for all members to follow. She is most deserving of this award.”

Upon learning of her selection as the 2018 Cretsos Award winner, Dr. Greyson said, “I am honoured to be the 2018 recipient of the James M. Cretsos Leadership Award from the Association for Information Science and Technology. ASIS&T has provided me with rich opportunities for leadership as well as scholarly community, and I look forward to many years of continued involvement with the Association”

Dr. Greyson will accept the award at the 2018 meeting of the Association for Information Science & Technology (ASIS&T) which will be held in Vancouver, Canada, November 10-14, 2018.

Founded at the beginning of the information age in 1937, ASIS&T has promoted the development and understanding of information science and documentation. Through its 80 decades it has reflected a rapidly changing landscape, embracing and promoting new advances in technology to improve all aspects of information collection, management, storage, use and communications. ASIS&T members are at the forefront of research and practice within Information Science. Leading discoveries on how we organize, relate, learn, and access information, our members are changing the face of information utilization. From fine arts to health informatics, ASIS&T is a synergistic organization that allows the exchange of ideas to flourish for the benefit of the whole international field.