My Impressions of the ASIS&T 2018 Annual Meeting

I was asked to write about my impressions of the ASIS&T 2018 Annual Meeting (AM18), which was held in Vancouver, B.C., Canada from November 10-14, 2018. My tweets from the conference are accessible at https://twitter.com/nareshag. I have not missed a single ASIS&T meeting since my very first annual meeting in 2008 in Columbus, Ohio. Going to the annual meeting is going to my professional home for me. Each year, I look forward to meeting all the wonderful people, friends and colleagues, who I have worked with or known for more than a decade now. I also like getting to know some of the new members and first time attendees, and telling them why ASIS&T is so wonderful.

The annual meeting was held right after the International Conference on Knowledge Management (ICKM) which was held in the same venue from November 9-10. As has been a feature of ASIS&T Annual Meetings, AM18 had a good mix of full paper sessions, posters, panels, social events and governance meetings. The meeting had two excellent plenary sessions: “The people’s Internet: How to arrive at a digital world that respects human values” by Ramesh Srinivasan, and “The health of the public sphere in the age of algorithmic platforms and information glut” by Zeynep Tufekci. Zeynep spoke on one of the most pertinent issues facing us all today in a talk that was perhaps one of the best that I have ever attended. Among the few changes at the annual meeting this year was that the Association Business Meeting was combined with lunch, and was widely attended and where the new proposed ASIS&T bylaws were discussed. Conversely, the New Member/First Time Attendee Orientation became a late afternoon event led directly by the Headquarters (now called ASIS&T Central) as opposed to a Brunch organized by the Membership Committee in the past. The awards luncheon was a Dinner Banquet this year.

A key highlight for me was the meeting of the South Asia Chapter. We had worked hard for its formation, and the chapter was recently approved by the Board. This chapter is working to connect information professionals and to recruit members for ASIS&T from the eight countries of India, Pakistan, Bangladesh, Sri Lanka, Nepal, Bhutan, Maldives and Afghanistan, collectively representing more than one-fourth of humanity. In October, I was invited by Professor Kanwal Ameen to remotely launch the chapter during the 2nd International Conference on Information Management & Libraries held at the University of the Punjab, Lahore, Pakistan from October 10-12, 2018.

I also participated in deliberations on the charges of the new committees at ASIS&T, as well as in the Membership Committee Meeting. Along with other Special Interest Groups (SIGs) that held their meetings, SIG Knowledge Management met to discuss the plans for the upcoming year. My paper presentation, ‘Ascertaining the place of Library & Information Science in Knowledge Management research’ with Md Anwarul Islam, elicited good participation and discussion.

It was a privilege to discuss various aspects of context with Professor Michael Buckland and to be able to present him with my book, ‘Exploring Context in Information Behavior’, which was on display at the Morgan & Claypool table. Among the many fruitful conversations during AM18, I enjoyed talking to Professor Toni Carbo, who said how important listening as a skill is. She was awarded the ‘Award of Merit’ this year. On December 1, I traveled to Providence, Rhode Island and interviewed Professor Carbo for my initiative, Project Oneness World.

The School of Library and Information Science at Simmons University had a strong showing at AM18, and was led by our new Director Professor Sanda Erdelez.

I was just one of the few hundred participants at AM18. Each participant would have such a report and impressions from the conference. Once you go to an ASIS&T annual meeting, you keep going back. I hope some of you reading this can attend AM19 in Melbourne, Australia – which will be the first ASIS&T annual meeting in the Asia-Pacific, and only the second one outside North American in its 81-year old history. 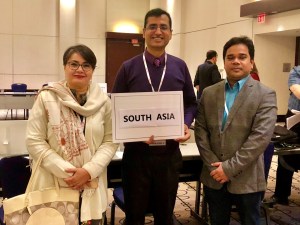 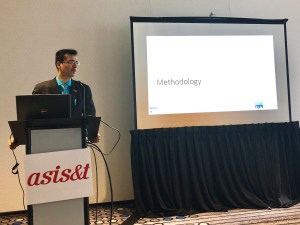 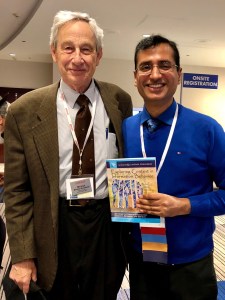 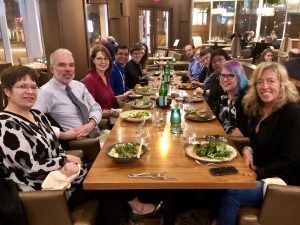 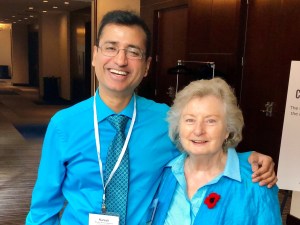 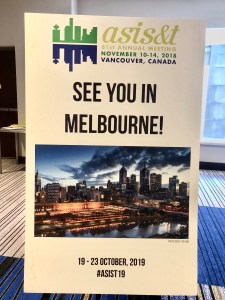 —
Naresh Agarwal is an Associate Professor at the School of Library and Information Science at Simmons University, Boston. He has held various leadership positions at ASIS&T. He was a member of its Board of Directors from 2012–2014. Naresh was the Chair of its Membership Committee (2015–2017), the Conference Co-Chair of its 80th Annual Meeting, Washington, D.C., Oct. 27–Nov. 1, 2017, and was awarded the ASIS&T James M. Cretsos Leadership Award in 2012. As Chair of SIG ED, he led the SIG to be the SIG of the Year in 2012.