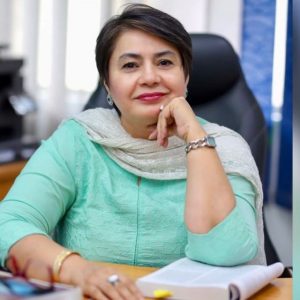 The Association for Information Science & Technology (ASIS&T) is delighted to announce that Dr. Kanwal Ameen is a 2019 recipient of the ASIS&T James M. Cretsos Leadership Award. The award’s purpose is to recognize a new ASIS&T member who has demonstrated outstanding leadership qualities in professional ASIS&T activities.

Prof. Kanwal Ameen has joined Home Economics Women University in Lahore as its first Vice Chancellor after 34 years of her service in the field of Library and Information Science.as a professional, academician, researcher and administrator. She served as Chairperson, Dept. of Information Management for nine years (May 2009- May 2018); and Chair of Doctoral Program Coordination Committee of the University of the Punjab, Lahore for 4 years. She has also served as Director, External Linkages of the same university. She is Founding Chair of South Asia Chapter, ASIST and served as Cochair Visual Presentations, AM 2017. She has made commendable efforts in raising the number of ASIS&T memberships in Pakistan.

She has authored more than 150 publications which includes scholarly journal articles, conference proceedings and book chapters. She is the Chief-Editor of Pakistan Journal of Information Management & Libraries and on editorial advisory boards of international journals. She serves on organizing committees of well reputed international conferences, have chaired their sessions, and has presented many papers.

Over the years she has developed special interest in the soft skills, emotional intelligence skills, workplace communication skills and leadership.

In nominating Dr. Ameen, Nosheen Warraich of the University of the Punjab wrote, “Prof. Ameen is ambitious about ASIS&T South Asian chapter initiative and got approved its bylaws in 2018. She is the founding chair of SA chapter. She is a visionary leader and believe in collaboration. She also chalked out the plan for the activities of SA chapter including the organization of an international conference to be held in Pakistan with the collaboration of ASIS&T in October 2019. She also has been working to recruit new student and professional members in Pakistan. She has also stimulated membership from other counties in South Asia.”

Dr. Naresh Agarwal of Simmons University wrote, “A deep believer of diversity, inclusion, and of friendly relations among countries and among people, Kanwal is always working to encourage and advocate for the information science field and for ASIS&T. She is friendly and jovial and is wonderful to work with. If people in Pakistan know about ASIS&T, it would be largely due to her efforts. In her 7 years of membership at ASIS&T, she has contributed in different ways – as author, reviewer, mentor, co-chair, chair, committee member, and has helped recruit and retain members.”

Upon learning of her selection as a 2019 Cretsos Award winner, Dr. Ameen said, “
I am very honoured to have been accepted as a Cretsos Award winner. On this occasion I would like to say my heartfelt thanks to the jury and Lydia Middleton, Executive Director of ASIS&T for the hard work they did in this regard. ASIS&T, you are simply amazing! Keep on flourishing world over.”

Dr. Ameen will receive her award at the 2019 meeting of the Association for Information Science & Technology (ASIS&T) which will be held in Melbourne, Australia, October 19-23, 2019.