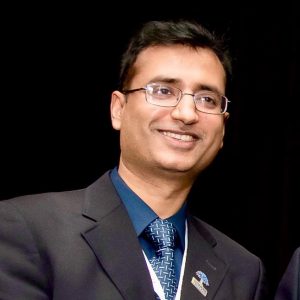 Naresh Agarwal is an Associate Professor and Director of the Information Science & Technology Concentration at the School of Library and Information Science at Simmons University, Boston. He earned his Ph.D. from the National University of Singapore (NUS)'s Department of Information Systems, School of Computing. Naresh's research area is information behavior and knowledge management. His book 'Exploring Context in Information Behavior: Seeker, situation, surroundings, and shared identities' was published in 2018 by Morgan & Claypool. Naresh also studies serendipitous information encountering and the causes and effects — both on the receiver and the sender — of information avoidance and non-response behaviors, especially by people who use smartphones and social media. He has been a keynote/invited speaker at workshops and conferences in different countries, including in the U.S., Japan, France, Pakistan, and Bangladesh.

Naresh’s involvement in and dedication to ASIS&T has been continuous since joining the association as a student member. He was a member of its Board of Directors and Director of the Chapter Assembly (2012-2014). He organized the ASIS&T Annual Meeting in 2017 as Conference Co-Chair, and is the Poster Co-Chair of the 2020 Annual Meeting. He has led various SIGs over the years as Chair-elect and Chair – SIG Social Informatics, SIG Health, SIG ED (won SIG of the Year in 2012), and SIG KM. He was awarded the ASIS&T James M. Cretsos Leadership Award in 2012. Naresh was a member of the Strategic Planning Group. As Chair of Membership Committee, Naresh worked hard to find solutions for retaining and recruiting members, and also organized/hosted the New Members’ Brunch. He envisioned and initiated the South Asia Chapter of ASIS&T in 2018, and is currently Advisor to the Chapter. He has held other roles, such as Co-Faculty Advisor to the Simmons Student Chapter, Student Chapter Representative to the Chapter Assembly, Mentor for New Leader Awardee, and member of committees such as the Professional Development Committee, and task forces. He has been a part of various juries e.g. SIG USE Elfreda Chatman Research Award and Innovation Award, Clarivate Analytics Doctoral Dissertation Proposal Award, Watson Davis Award (Jury Chair), James Cretsos Leadership Award, and New Leaders Award. Over the years, Naresh has participated in a variety of panels and presentations, while contributing to ASIS&T publications as an author and reviewer.

Naresh serves as Faculty Senator at Simmons University, along with other leadership roles. Apart from ASIS&T, his memberships have included ALISE, the Association for Information Systems, the Decision Sciences Institute, and the Serendipity Society.  He has been the Chair of the Doctoral Students Network of Asia Pacific Rim Universities (APRU), a network of 49 leading universities in Americas, Asia and Australasia. Prior to entering the doctoral program at NUS, Naresh worked for six years in technology roles in the voice-over-IP, bioInformatics, and digital cinema industries. Among other things, Naresh has been a debater and public speaker and likes to paint in watercolor and oil. In 2018, he started an initiative http://www.projectonenessworld.com to gather human stories through interviews to inspire other human stories. You can learn more about him at http://web.simmons.edu/~agarwal.

Naresh has various ideas for member recruitment and retention, with a lot of brainstorming over the years while he was the chair of the membership committee, and part of the ASIS&T Strategic Planning Group. These include brainstorming what benefits exist for various types of members, how to manage the cost of membership, incentivize membership, increase collaboration/ networking, increase renewal rates, attract new members from various parts of the world such as Africa, East Asia and South Asia, and Australia, provide payment mechanisms other than credit cards for joining as members, provide programs and services that are of value to members (at the Annual Meeting and throughout the year), increase and improve mentorship, continue the relevance and value of publications, increase outreach and advocacy of ASIS&T, promote knowledge retention and transfer, and lead the fight against disinformation and fake news.

If elected President, his areas of thrust would be: