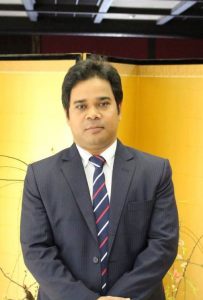 The Association for Information Science & Technology (ASIS&T) is delighted to announce that Dr. Md. Anwarul Islam, Associate Professor, Department of Information Science & Library Management at the University of Dhaka in Dhaka, Bangladesh, is a 2021 recipient of the ASIS&T Cretsos Leadership Award. The award recognizes a new ASIS&T member who has demonstrated outstanding leadership qualities in professional ASIS&T activities.

The award is named in honor of James M. Cretsos, long-time member and leader in ASIS&T. Cretsos served as President of ASIS&T in 1997 and was also an active leader and contributor to the Southern Ohio Chapter, SIG-CON, SIG-MED, and the Awards & Honors Committee. He is perhaps best remembered for the role he played in mentoring emerging leaders in the field of information science. Candidates are assessed based on the following four criteria: participation in ASIS&T annual meeting as organizer, moderator, speaker, discussant, etc.; participation in programs and activities of Special Interest Groups (SIGs), chapters and/or student chapters; services on ASIS&T committees; and recruitment of new ASIS&T members and/or retention of existing members.

In his nomination of Dr. Islam, Alton Chua, Associate Chair (Research) at Nanyang Technological University wrote of his many successful efforts to grow ASIS&T membership in Asia. “As a country representative of this regional chapter, his primary aims were to increase the awareness of ASIS&T activities and draw more members from Bangladesh.” Chua continued, “Under the mentorship of one of the leaders in ASIS&T, Anwar founded the South Asia (SA) Chapter in 2018. He became the first co-Chair (2018-2019) and helped to increase membership from the eight countries of South Asia including India, Pakistan, Bangladesh, Nepal, Bhutan, Sri Lanka, Maldives and Afghanistan.”

In support of Dr. Islam’s nomination, Dr. Sam Chu of the University of Hong Kong Faculty of Education wrote, “Anwar substantially contributed to the advancement of ASIS&T through various leadership positions, by not only conducting the assigned duties and responsibilities, but strived to go beyond what is expected. Anwar’s greatest contribution to ASIS&T is to recruit new members from South Asian countries.”

Dr. Naresh Kumar Agarwal of Simmons University School of Library and Information Science and ASIS&T 2021 president-elect echoed the sentiment regarding Dr. Islam, adding, “…in just a few years, Anwar has served two special interest groups (SIG KM / SIG III), two Chapters (Asia Pacific, South Asia), a committee (Membership), and a Conference Program Committee, apart from serving ASIS&T as author and reviewer. He has been instrumental in starting a new chapter, member recruitment and retention, and won three awards… More than these activities, it is the intense interest that Anwar has developed to serve ASIS&T, its membership, and participate in its activities, which is commendable.”

Adding to the support of Dr. Islam’s nomination, Dr. Javed Mostafa, professor at the University of North Carolina at Chapel Hill Carolina Health Informatics Program wrote, “Anwar’s dedication to ASIS&T is impressive, and he has been serving in many critical volunteer and leadership roles for the association.”

Upon learning of his selection as a 2021 Cretsos Award winner, Dr. Islam said, “I am delighted and honored to get this prestigious James M. Cretsos Leadership Award from ASIS&T. Since 2015, ASIS&T has become my professional home and I got so many opportunities to grow as a leader, researcher and dreamer in the scholarly community. During this journey, I am ever grateful to my mentors and other peers who have helped me to break out of my nervousness. Staying in a developing country and stepping out to become a good researcher is often not easy. For me, ASIS&T helped harness many opportunities and I aim to continue my journey with more involvement. Finally, I am thankful to the jury members for having believed in me and my work.”