Documents That Changed the Way We Live 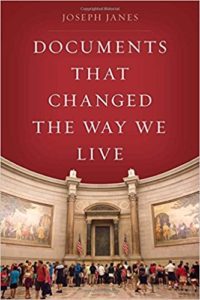 In 1854, an epidemic of cholera struck the Soho area of London.  The prevailing belief was that it was spread by “miasma,” or noxious air.  John Snow, a physician and miasma skeptic, began talking to local residents and then to plot the homes of those infected on a map of the neighborhood.  This map revealed that cases were centered on a particular pump on Broad Street and illustrated a grim truth:  turn left to get your water and your family likely dies, turn right and you live.  After the pump was closed, the epidemic eased, providing one of the first solid pieces of evidence for the germ theory of disease and helping to give rise to epidemiology.

This is but one example of information objects playing important roles in history:

Not all “documents” are textual or written, either:  consider the Riot Act, which had to be read out to work, the first x-ray images in 1895 which prompted a movement to wear lead undergarments for privacy, the “We Can Do It!” poster, widely – though erroneously – assumed to be a recruiting poster and image of Rosie the Riveter, the AIDS Quilt, the Zapruder Film, the missing 18½ minutes of the Watergate tapes or even the supposed (though never produced) “list” of Communists claimed by Joseph McCarthy.

This webinar will tell the stories of documents, their creation and motivation, influence, importance, historical and social context, and connections to contemporary information objects, technologies, and trends. Revealing the power and importance of information through these stories raises awareness of the central and critical position that information holds and also tells the story of human society and its never ending evolution.

Joseph Janes is an Associate Professor at the University of Washington Information School. A frequent speaker in the US and abroad, he is the author of several books on librarianship, technology, and their relationship, including Library 2020, and has written a monthly column for American Librariesmagazine since 2002. He is the creator and host of Documents That Changed the World, a popular podcast series on the cultural impacts of historic documents. He holds the M.L.S. and Ph.D. from Syracuse University, and has taught at the University of Michigan, the University of Toronto, the University of North Carolina at Chapel Hill, the State University of New York at Albany as well as at Syracuse and Washington.