In this webinar Ramesh Srinivasan will discuss his provocative book where describes the internet as both an enabler of frictionless efficiency and a dirty tangle of politics, economics, and other inefficient, inharmonious human activities. We may love the immediacy of Google search results, the convenience of buying from Amazon, and the elegance and power of our Apple devices, but it's a one-way, top-down process. We're not asked for our input, or our opinions—only for our data. The internet is brought to us by wealthy technologists in Silicon Valley and China. It's time, Srinivasan argues, that we think in terms beyond the Valley.

Ramesh Srinivasan focuses on the disconnection he sees between designers and users, producers and consumers, and tech elites and the rest of us. The recent Cambridge Analytica and Russian misinformation scandals exemplify the imbalance of a digital world that puts profits before inclusivity and democracy. In search of a more democratic internet, Srinivasan takes us to the mountains of Oaxaca, East and West Africa, China, Scandinavia, North America, and elsewhere, visiting the “design labs” of rural, low-income, and indigenous people around the world.

He talks to a range of high-profile public figures—including Elizabeth Warren, David Axelrod, Eric Holder, Noam Chomsky, Lawrence Lessig, and the founders of Reddit, as well as community organizers, labor leaders, and human rights activists. To make a better internet, Srinivasan says, we need a new ethic of diversity, openness, and inclusivity, empowering those now excluded from decisions about how technologies are designed, who profits from them, and who are surveilled and exploited by them. 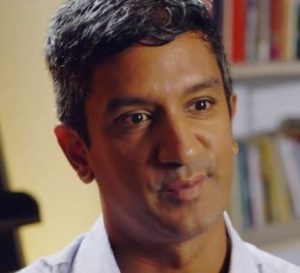 Ramesh Srinivasan has been a faculty member at UCLA since 2005 in the Information Studies and Design Media Arts departments, as well as the founder of the UC-wide Digital Cultures Lab. He has worked in over 70 countries studying internet/social media technologies, AI, big data’s impacts on political life, economic concerns and futures, and cultural and global effects. He has published over 70 academic papers and received 3 peer-reviewed major grants from the National Science Foundation, along with many other prestigious awards and grants. He has worked with governments, businesses, activists, and civil society organizations to advise on technological futures. He also serves as a national surrogate for Senator Bernie Sanders’ 2020 presidential campaign on issues of technology policy. His research investigates technology ‘s relationship to democracy and politics, public health, policy, social change, economic development, distance learning, migration studies, and cultural heritage.

His most recent book, Beyond the Valley (MIT press), is the press’s top selling book, and illustrates potential for a digital world of the future that supports the interests of environmental sustainability, democracy, workers, and cultural diversity, and businesses in the innovation of technology. The book was named a top ten book in Tech by Forbes and has been covered by dozens of networks and progressive media venues. Other books he has authored include: “Whose Global Village? Rethinking How Technology Impacts Our World” with NYU Press, and “After the Internet” (with Adam Fish) on Polity Press. Srinivasan is a regular speaker for TED Talks, and has made routine media appearances on MSNBC, NPR, Al Jazeera, The Young Turks, Radio Pacifica, AtlanticLive, and the Economist. He has written op-eds or contributed to work featured in dozens of major newspapers and magazines, including the Guardian, Wired,  Al Jazeera English, WNYC, Salon, the Washington Post, Foreign Policy, the LA Times, FAZ (Germany), The Financial Times, CNN, Folda Sao Paolo (Brazil), The Washington Post, BBC, Forbes, The Huffington Post, Christian Science Monitor, National Geographic,  Quartz, CBC, and more.