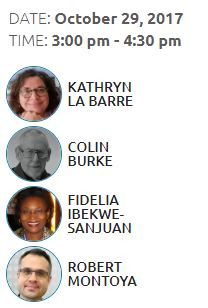 This invited panel session will engage the audience through presentation and discussion of the work of three scholars representing a broad trajectory of career accomplishments. The work of these three individuals has been selected in order to showcase the breadth, depth, and richness of Information History in celebration of the 80th anniversary of the Association for Information Science and Technology.

It isn’t easy being green

With a deep research trajectory in the history of American non-profit organization and the history of America’s intelligence agencies including the books: Information and Intrigue (2014) and Information and Secrecy: Vannevar Bush, Ultra, and the Other Memex (1994), Colin Burke has also recently completed American Information Wars, a monograph on post-WWII developments, including early systems of the CIA, and technologies for intelligence. This talk will examine the career of James Perry, as an example of the challenges faced by information scientists during the 1940s and 1950s.

In search of connections: The European origins of LIS

As the recipient of the ASIST History Research Award in 2016, Fidelia is working on a book about the European origins of IS as a follow-up to a book she previously published in French in 2012 entitled “Information Science: origins, theories and paradigms (La science de l’Information: Origines, théories et paradigmes, Hermès-Lavoisier, 261 pages). She has been conducting interviews with IS scholars in Croatia, Denmark and Spain in order to determine who their modern IS pioneers were and their contribution towards the emergence of IS as higher education field of teaching and inquiry. She’ll share her preliminary findings of this research with a focus on the interconnections and influences of these European pioneers on one another.

Montoya’s recently defended dissertation, “Contingent Consensus: Documentary Control in Biodiversity Classifications,” focuses on knowledge organization and its intersections with biodiversity studies, philosophy of information, documentation, and science and technology studies. In this research he examines how control functions within the biodiversity environment, defined as it is by conceptual and documentary contingency, and how scientists negotiate the tensions that arise between competing classification structures. The presentation will illustrate how global biodiversity knowledge systems have ingrained epistemological commitments that arise from consensus-based social structures, and how such systems trace changes to these commitments as they evolve over time. This research, currently being turned into a book, contextualizes the importance of creating more inclusive, diverse, and ethical knowledge organizing structures both within and without the field of biodiversity.