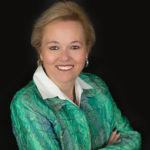 Lydia Middleton is the Executive Director of the Association for Information Science and Technology (ASIS&T). She assumed that role in May of 2017. Prior to joining ASIS&T she served as an adjunct faculty member in the Milken Institute School of Public Health at The George Washington University where she taught courses in strategy, management, health policy and the US Health System. Ms. Middleton served as Executive Director of the American Academy of Orthotists & Prosthetists until 2016 and before that she served as the President and CEO of the Association of University Programs in Health Administration from 2004-2013. She was named by Modern Healthcare as one of the 100 most powerful people in healthcare in 2004.

She currently serves on an advisory board to the Association for Talent Development. Prior volunteer roles include serving as a member of the board of directors of the Graduate Healthcare Administration Training Program of the VA, President of the Federation of Associations of Schools of the Health Professions, Chair of the Small Staff Association Committee of ASAE, and serving in various consulting capacities to academic and association clients.

Middleton earned her bachelors degree in International Relations and Spanish from the University of Virginia, and her MBA from Thunderbird Graduate School of International Management in Phoenix. She became a Certified Association Executive through ASAE in 2002.